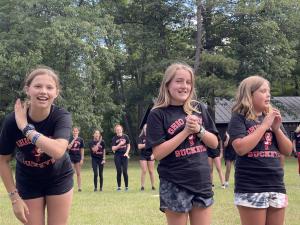 Today began as four great teams. Wisconsin, Indiana, Michigan and Ohio State encircled the flagpole as we sang hip, hip hooray to the camper and counselor of the day. Our Final Four competition is a special tradition in second session and the girls were ready to play!  Each team sat together at breakfast eating French Toast, allowing campers of all ages the opportunity to meet and get to know girls from other cabins.

The competition began with opening ceremonies on the upper athletic field.The weather was warm with scattered clouds which kept us cool as teams sang their hearts out and shared their quests for sportsmanship, teamwork and spirit. After funny skits, songs, cheers, campers raced their hearts out during running relays as captains ran alongside encouraging campers to give it their all-I think a few captains may have run over ten miles today!!

Campers competed in two series of activities this afternoon, and completed the day with a spirited Capture the Flag.  Everyone’s energy was high as counselors reported scores to the commissioners event by event. The weather teased us throughout the afternoon with short sprinkles here and there, but the sunshine persevered, providing a beautiful sunset over Blue Lake. We will resume competition tomorrow with the acclaimed Gonzo Relay!!  Until then….GO FIGHT WIN!!