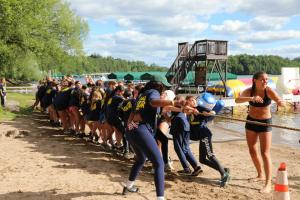 Excitement filled the air as the sun rose above Blue Lake this morning. With the water reflecting the trees and a cloudless sky, it was a perfect morning to start off day two of Final Four 2022. Campers awoke from their slumber and swapped crocs for gym shoes, and sleepy eyes with game faces.

After celebrating both the camper and counselor of the day at flagpole and a satisfying breakfast of McDucky’s and oatmeal; Indiana, Wisconsin, Michigan and Ohio State headed off to battle each other in Agawak’s annual Big Games.

Seniors went head to head in softball and Neukum whilst the juniors played both basketball and kickball. The morning was topped off with a very intense but also very entertaining staff dodgeball game.

It was the afternoon however, when things really started to heat up - and not just literally. Campers began to head to their stations in preparation for Gonzo, a camp wide relay involving over 50 different tasks where everyone brings their all. As the bell rung and the race began, I was overwhelmed by the sportsmanship, determination, love and kindness that was illustrated by all. As a first year counselor from the other side of the world, I felt proud to be a part of this place. A place that cheers for all no matter what team you’re on, and a place that is full of support, always.

After the kayaking, running, puzzle solving, sliding, blobbing and much more had come to an end it was Ohio State that rounded the corner and rung the bell to mark the end of Gonzo. To finish off Final Four for 2022 was a camp wide tug of war. This time Michigan took the win.

Today was a day that celebrates what it means to be an Agawak Girl. Where campers brought great attitude, grit, appreciation, wonder, acceptance and kindness. Qualities that are present in all Agawak girls and make the Blue Lake a pretty beautiful place to be.